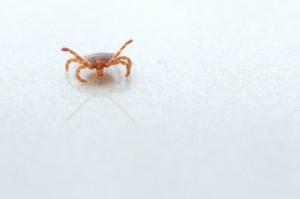 A recent story in the Cape Cod Times suggested that deer ticks be destroyed by any means necessary as a way of controlling Lyme disease.

In a report released by a special state commission on Lyme disease urged state and local officials to reduce tick populations and the deer that carry the ticks. You can find that story online here: http://bit.ly/9F6GI3.

So, we thought today we ought to talk about ticks, and tick treatments. First, a few facts on ticks:

* Although commonly referred to as insects, they are technically arachnids.

* They are classified as parasites since they all feed on the blood of host mammals.

* Their species number in the hundreds, but only a handful typically transmits disease to humans.

* The ticks of greatest concern in the U.S. are the blacklegged tick (also known as the deer tick in the eastern U.S.), the Lone Star tick, and the dog tick. For us here on Cape Cod and along the Massachusetts south shore, it’s the deer tick we worry most about.

* They do not jump or fly. Typically, they transfer to hosts by waiting on tall grass and crawling aboard when a mammal happens by.

* They can be active when the ground temperature is above 45°F.

* Ticks that endanger humans also choose deer hosts and are usually prevalent wherever deer are found. This is why the special state commission on Lyme disease is recommending that the deer population be reduced in our area.

* Tick bites often go undetected because they do not hurt or itch.

* They can enter your home and live there for extended periods.

That last fact is of particular concern. We can follow all of the recommended protective steps for outdoor activities, like wearing shoes or sneakers and socks with our pant legs tucked into the socks, and yet we’re potentially vulnerable inside our homes as well.

In fact, The Pest Pros are offering a new package treatment that will address both mosquito and tick control during the coming season. Be sure to check back to this website for news concerning the 2013 treatment season.