You are here: Home » Pest Pro News » Types of Ticks

Ticks are some of the worst pests you can encounter. Their small size makes them hard to find, and their bites can carry deadly diseases. Therefore, they can cause major problems if they make their way into your home or workplace.

For this reason, it’s incredibly important to keep ticks out of your residence. However, different types of ticks carry different threats, so it can be helpful to know which ones you’re dealing with.

Ticks are minuscule arachnids. They’re usually only a few millimeters in length, though their size can vary dramatically as they feed. Unlike other arachnids, such as spiders, which typically feed off insects, ticks attach themselves to much larger hosts and act as parasites. These hosts are generally mammals, and often include humans.

Ticks wait in areas like tall grass, perched on the edges of plants until a suitable host passes by and brushes against it. Then they grasp onto the host and crawl over its skin until they find a good place to feed. When they find one, they bury their heads beneath the skin, using their mouths to consume blood. If left there long enough, they can drink enough blood to make them swell up to several times their original size.

Hosts don’t typically feel ticks attach to them, so it can be easy for them to go unnoticed.

Why Is It Important to Keep Ticks out of Your Home?

By themselves, tick bites don’t often cause any significant harm to a host. The amount of blood they can consume is so small that it makes virtually no difference. The reason ticks are dangerous isn’t because of what they take away from the host, but rather what they might inject.

A tick can inadvertently infect you with pathogens picked up from the blood of past hosts. For this reason, ticks can carry a variety of different diseases. Here are some of the most common illnesses transmitted by ticks:

It’s important to note that not every tick will transmit these diseases. Different ticks transmit different types of diseases. However, even if you’re bitten by a species of tick known to carry a particular disease, the tick in question may not be carrying it. Plus, even if the tick that bites you is carrying a disease, you may be able to avoid contracting it if you remove the tick in time. For example, you can greatly reduce your chances of contracting lyme disease from a tick if you remove it within 48 hours.

What Types of Ticks Live in Massachusetts?

To know how to handle any given tick situation, it can be helpful for you to be familiar with the different kinds of ticks in your area and the risks they pose. There are three main types of ticks in Massachusetts, and each of them comes with their own distinct features and hazards. Knowing these can help you respond appropriately to each one, or at least be aware of the risk that comes with being bitten by it. 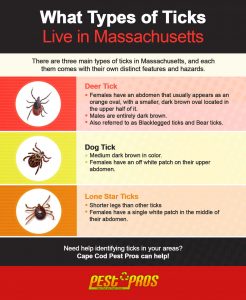 Deer ticks, also called black-legged ticks, appear throughout the entire eastern half of the United States. Their size can vary significantly, depending on their age and how much blood they have consumed. Of the three types discussed here, deer ticks are generally the smallest.

Females have a distinct head and moderately long legs, all of which are dark brown. Their abdomen usually appears as an orange oval, with a smaller, dark brown oval located in the upper half of it. Males have a similar structure, but tend to be a bit smaller. They also lack the orange section of the abdomen that females have, and are entirely dark brown.

The most common diseases for deer ticks to transmit are lyme disease, anaplasmosis, babesiosis, tularemia and Powassan disease. They can also release a neurotoxin that causes tick paralysis, where the host experiences tingling and weakness throughout their body.

Deer ticks typically live for around two years, surviving through the winter. Their preferred hosts are rodents and deer, though they will happily latch onto humans, as well.

Dog ticks are usually a medium-to-dark brown color, though female American dog ticks often have an off-white patch on their upper abdomen. Their heads are less distinct than those of deer ticks, but they tend to have longer legs, especially brown dog ticks.

Diseases commonly transmitted by dog ticks include Rocky Mountain spotted fever and tularemia. Like deer ticks, they can cause tick paralysis with their neurotoxins. Also, like deer ticks, they can survive for around two years without feeding. Their preferred hosts tend to be medium-sized furry animals such as possums, raccoons and dogs. They’ll also target humans when given the chance.

Lone star ticks appear mainly across the eastern half of the United States, though they don’t quite make it all the way to the northern border. They’re particularly prominent in Massachusetts.

Like deer ticks, lone star ticks have a very distinct head, though their legs tend to be a bit shorter than those of the other two types. They’re usually a medium brown color. On their abdomens, males typically bear some black markings, while females have a single white patch in the middle, from which the species gets its name.

The most common diseases for lone star ticks to carry are ehrlichiosis and tularemia, though they’ve been known to transmit others as well. Lone star ticks can usually live for up to three years. Their preferred hosts are deer and turkeys, though — like the others — they’ll attach to humans as well.

All three main types of ticks — deer ticks, dog ticks and lone star ticks — are populous in Massachusetts, and each of them can carry harmful diseases. If you’re experiencing repeated problems with ticks at your home or business, it may be time to call in a pest control service.

Thankfully, Pest Pros has your back. We offer extermination services across the Cape Cod area, and we’ll even provide a free inspection before getting to work on eliminating the ticks at your residence. Get in touch with us today to start the process of ending your tick troubles!